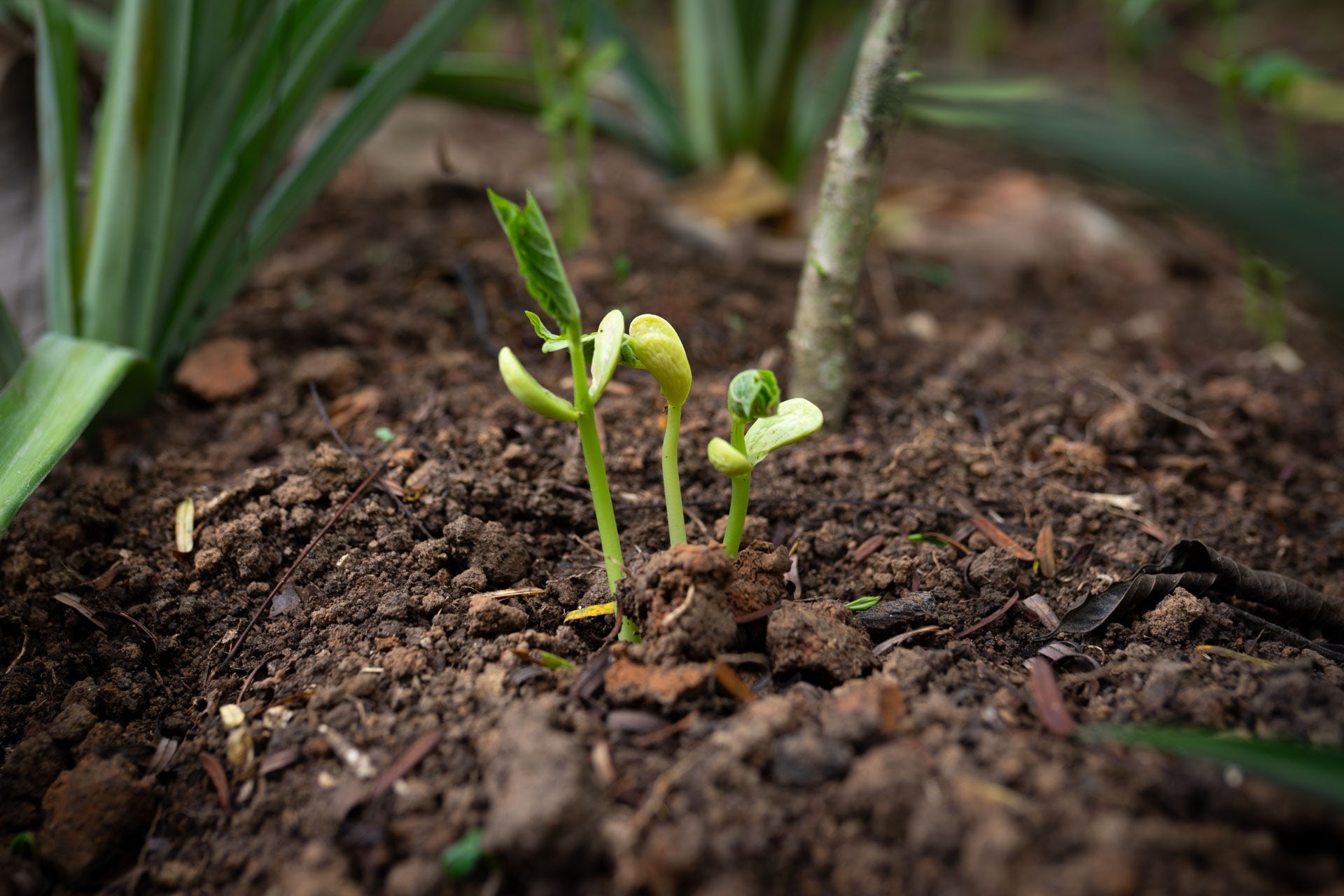 Syntropic agriculture is an alternative to conventional farming methods and perspectives that results in soil regeneration, forest expansion, and an increase in production. It was developed in Brazil between the 80s and 90s by Ernst Götsch, who analyzed and imitated the workings of nature. It can be applied both at a family or commercial level.

Guided by the inspiration, knowledge, and energy that Tierra Martínez from the Na'Lu Um Permaculture Institute always brings to us, we installed our experimental plot of syntropic agriculture, or agrofloresta, at the Chaikuni Permaculture Center last year, shortly before the start of the COVID pandemic.

During the following months of confinement and uncertainty, the importance of diverse and local productive systems that contribute to food sovereignty by generating resilient communities became utterly clear. The fundamental concepts and techniques of syntropic agriculture allows for the cultivation of a wide variety of species, efficient land use, soil regeneration, and increased plant cover.

How does syntropic agriculture work?

Syntropic agriculture is based on the dynamics of natural ecosystems, specifically, the succession of species that leads from bare ground to lush forest. At each stage of this process, the vegetation itself creates new conditions for other species to develop, occupying different strata and different ecological niches. At the same time that the diversity and quantity of living matter (biomass) increases, the system takes advantage of greater amounts of solar energy and feeds itself from its own organic matter. It becomes ever more complex, stable, and self-sufficient.

The agrofloresta system makes use of these processes to maximize productivity and ecosystem function: it works with multiple species and considers their functions and interactions, their distribution on the ground, and their heights and stages of development. Through pruning, recycling of organic matter, and selection and synchronization of crops, it is possible to control and "recharge" the system. The result is a dynamic, diverse, and productive forest that nourishes itself through natural processes, reducing the effort and dependence on external inputs.

In this sense, syntropic agriculture suggests the opposite to conventional agriculture, which seeks to privilege single species by installing monocultures whose productivity is maintained through agrochemicals, degrading soils and impoverishing ecosystems and vulnerable communities.

An alternative for the Amazon

In the case of the Amazon, the dynamics of nutrient recycling, accelerated by a humid tropical climate, allow relatively poor soils to host impressive forests. When a forest is slashed and burned for cultivation, however, these cycles are interrupted, and the soil drastically loses its fertility after a couple of years.

The communities near Iquitos progressively resort tocassava monocultures, whose derivatives are destined for commerce in the city. The demand for farmland and forest clearing has increased as the soil becomes poorer and families increasingly depend on money, including to buy food that they could (and used to) grow on their farms.

Regenerative agroforestry systems such as agrofloresta or chacras integrales that we promote at Chaikuni have a great potential to diversify and increase production, benefiting both family consumption, food sovereignty, and income generation, in a sustainable way. In these systems, annual crops (mainly cassava and plantain) are harvested, while fruit, palm, and timber trees as well as medicinal plants grow simultaneously, to be harvested in successive stages.

With the rise of so-called bio-businesses, the diversity of the Amazon offers an immense range of alternatives with commercial potential; native fruit trees that are considered super-foods, medicinal plants of great interest (including ayahuasca vine), essential oils that reach high prices on the international market (such as rosewood, aniba rosacea), and tropic timber like mahogany, among others. Many of these species can be combined in an agroforestry system, providing diversified income to families in the short, medium, and long term.

At the same time, the maintenance and support of the diversity and the regeneration cycles of the forest are inherent aspects in traditional agriculture and land-use methods of Amazonian peoples. Cultivating and promoting diverse systems focused on food sovereignty also implies considering cultural aspects and ancestral knowledge. The latter have been increasingly relegated by models of "modernity" and "progress," which are often entirely misplaced in an Amazonian context and highly destructive.

More and more people are realizing that only a standing and healthy forest is the real option to generate wealth and well-being in the Amazon (and beyond). Amazonian communities demand viable productive alternatives after the limited success of many conventional agriculture projects. For many years now, the Chaikuni Institute has been dedicated to the investigation, development, and dissemination of regenerative techniques adapted to our local environment; high diversity agroforestry systems, cultivation without burning, and regenerative ayahuasca production. Last year we added and integrated the techniques of syntropic agriculture to our models.

In March 2020, Chaikuni staff and collaborators alongside the community members from Tres Unidos, San Pedro de Nanay, San José de Lupuna, and San Pablo de Cuyana participated in our second, 10-day Permaculture Design Course, with a major focus on the agrofloresta system. In addition to our plot, we installed two agroflorestas in the adjacent communities.

As basic crops of annual use, banana and cassava were planted in these plots, together with guava and fast-growing sangre de grado, which provide organic material, fix nitrogen, and provide coverage. Pineapple, papaya, chaya, and katuk were also included, alternating with lines of fruit trees including copoazú and cacao, to form an intermediate layer. Timber species were planted further apart. To complete the system, a wide variety of useful herbaceous plants were planted in the gaps, including lemon verbena, basil, turmeric, ginger, chili, radish, and cocona, helping to counteract the proliferation of invasive species and for their pest repellants properties.

Over a year has passed since we planted the agroflorestas. While we have already been harvesting a lot of produce, our current work is focused on maintaining the plot using the techniques of syntropic agriculture, evaluating its performance, and testing associations of the most appropriate crops for our area. We also continue to spread the ideas of diversity, resilience, and abundance in the communities, working side-by-side with rural families to implement their agroforestry systems and exchange knowledge to promote change. Syntropic agriculture has a promising future to advance on this path.